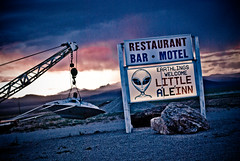 So we began the journey leaving Cedar City around 10 PM. On our way we stopped in Modena, Utah next to some rotting antique buildings from the 19th century. They were all boarded up and looked mysterious in the headlights of a parked SUV. We also stood next to the tracks as a train flew by. The energy of the beast rattled the ground like a land slide and whipped the dark wind creating the most intense sensation of freedom. We stood within a few feet of the passing train with our arms all stretched stretched to the sky. It’s these little moments that grow on you and burn into memory. It’s why people go on adventures; to experience life which is way too short. It’s why love has so much power. I love life. Now back to the story…

This crazy girl is Aleicia. Don’t ask me where she came from. I call her the rock chip repair girl. That’s how my amigos and I met her. She fixes rock chips on peoples’ windows next to one of our favorite country fast food joints in Cedar City called Top Spot. They have a plastic cow on the roof that makes the whole town laugh and you can get bonafide country store ice-cream for a buck! Well I take it back, it isn’t just ice cream; it’s a home-made/hand-made shake that costs a dollar. That’s how I met this amazing girl, Aleicia, telling her about Country Store Ice Cream while she was inspecting a rock chip on my wind-shield.

After leaving Modena, we crossed the Nevada state line around midnight and took a pit-stop in Pioche in Lincoln County, Nevada. We walked into a haunted motel with a reputation for ghosts. The town itself is of high red-neck quality, the towns-folk are very unusual and sometimes suspicious of outsiders. Some of them are storytellers of the the old west or descendants of outlaws. There’s not much to see in the middle of the night so we took pictures on the empty main as fluorescent street lights eliminated ancient buildings in strange white isolation. It is said when Pioche was first established as a mining camp in the late 1800s, over 76 people died in shoot-outs and cold blooded murder before anyone passed on of natural causes. So the town never gained the same notoriety as Tombstone or Dodge City but it was more lawless than both those towns combined. Pioche was nearly invisible on the vast frontier, being on edge of the Mojave wilderness and the Southern Fringe of the Great Basin.

The Great Basin enormous and covers most of Nevada. The geographical characteristics are usually valleys that stretch for dozens of miles with sparse mountain ranges popping up like islands in the sea. You can drive down an empty highway and never see another motorist for hours on end, even in the middle of the summer during tourist season. I once ran out of gas on my way to Baker, Nevada once and was stranded on the roadside for five hours before an RV came along with spare can of gas. This is why I love that country!

We didn’t stay long in Pioche but we stopped briefly at Cathedral Gorge State Park for a moon-lit hike through strange badlands formations and joked and teased in the dark of night. What an eerie place as it reminded me of a time when Skinwalkers and Chupacobras lurk in the shadows of Juniper and Pinion and coyotes howl in the sage. We watched one of the last thunderheads of summer pour down on the desert, and the lightning show was reminiscent of fireworks but it was natural and beautiful. We were soon driving through the downpour on our way to Nevada’s secret military base but the federal government still denies its existence!

Around 2-3 AM we arrived in the shambled ruins of Rachel, Nevada, on the northern boundary of Area 51. It doesn’t even look like a town at all. There’s the Little Ale’inn which is the major gathering place of UFO enthusiasts and alien experts from all over the world. Before arriving there, we took pictures of otherworldly grafitti; little green men with big bug eyes painted on buildings and water tanks. The rural decay around Rachel is amazing because of the extra terrestrial memorabilia that has become quite nostalgic. We stopped briefly at the inn to photograph the famous sign there, while looking up at shooting stars. That is one evening I will never forget.

We finally ventured down one of the back roads to the border of Area 51, to a gated entrance that was heavily lit. We approached the signs that say. “Use of Deadly Force, Authorized.” We parked the Blazer about twenty feet from the gate in the lights of a watch-tower and observed a unmarked military guard walking in the darkness. He was wearing what looked like a space suite and no one ever came to talk to us. They knew we were there long before we arrived. That’s all we witnessed of Area 51. We never saw strange lights, just a few shooting stars… There’s not much else to see and it’s not all that spectacular. We went out there because it was important that we actually had the experience. We set a goal and we accomplished our initiative. It is important to follow through on your initiatives just like it’s important for a climber on Mt. Everest to reach the summit. We accomplished our mission, but it came with a price.