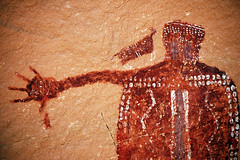 Do you ever listen to the wind, the silence, the rattling aspen leaves? Have you considered the end of the world, lately? Today feels very uncertain. The final throws of summer are dying; crickets still sing at night. Off in the distance I listen to the hum of the freeway, diesels and cars fly down I-15. Sunflowers are dangling in the wind bright as yellow day. I watched the purple sun vanish through a dark slit in the sky and celebrated a friend’s birthday at a local Japanese restaurant called, Ninja. When I came home this evening, I cracked open an interesting read titled, Lame Deer – Seeker of Visions. It provoked some thoughts on where our world is headed. I can’t help but think – we are approaching a cataclysmic change. Maybe this is why there’s so many dust-devils chasing through the desert? In the wasteland, the wind howls through the skeletal remains of our decaying civilization. Something unknown brews the outskirts of our modern life. While we are being drenched with mass media at the very center of all our populated cultural icons, something undeniably and truthfully cold is growing on the edges of our dream… Here’s what Lame Deer said about his vision:

“In my vision the electric light will stop sometime. It is used too much for TV and going to the moon. The day is coming when nature will stop the electricity. Police without flashlights, beer getting hot in the refrigerators, planes dropping from the sky, even the President can’t call up somebody on the phone. A young man will come, or men, who’ll know how to shut off all electricity. It will be painful, like giving birth. Rapings in the dark, winos breaking into the liquor stores, a lot of destruction. People are being too smart, too clever; the machine stops and they are helpless, because they have forgotten how to make due without the machine. There is a Light Man coming, bringing a new light. It will happen before this century is over. The man who has this power will do good things too — stop all atomic power, stop wars, just by shutting the white electro-power off. I hope to see this, but then I’m also afraid. What will be will be.”