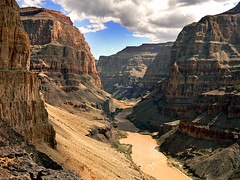 A couple of years ago I was giving a Hummer tour in the Grand Canyon with a bunch of Back Easterners. It was mid-July and about 110 degrees Fahrenheit, outside. We pulled off the rocky road road to take a short break and stretch. The road winds it’s way down into the inner gorge of the canyon via Whitemore Wash to river mile marker 187 on the Colorado River. It is one of only two access points that can get you that close to the river in a 4×4. During the break we walked over to a cluster of Barrel Cactus and I began some interpretation on the flora of Grand Canyon when all a sudden we heard the doors lock automatically on the Hummer. Silence fell over the group. It didn’t take long to realize that the keys were still in the ignition and all the windows were rolled up.

For the next 45 minutes we debated and conspired in the shade of the Hummer, trying to figure out what to do? We were 6 miles from the lodge which would require hiking all the way up out of Whitmore Wash and out of the canyon. Nobody had water. That wasn’t even a choice for various reasons. Finally we grabbed a sharp basketball sized piece of basalt and proceeded to knock out the back window of the vehicle, then continued the tour. That was a teachable moment. What did I learn? I learned to always keep the windows cracked on a vehicle that has automatic locks!

The other teachable moment hit me later up at the lodge. My boss had me fill out an incident report and he called in for a price quote on a window replacement. I was surprised to learn the repair would cost around 800 dollars. Had I knocked out the windshield, it would have been around 200 dollars. The the next six months I was the butt of quite a few jokes.

All of this was on my mind today. Little moments like these educate you. The mistakes you make are teachable moments. They are experiences that create an impact that are still recalled years down the road.